Why I Hate Religion But Love Jesus – Jefferson Bethke 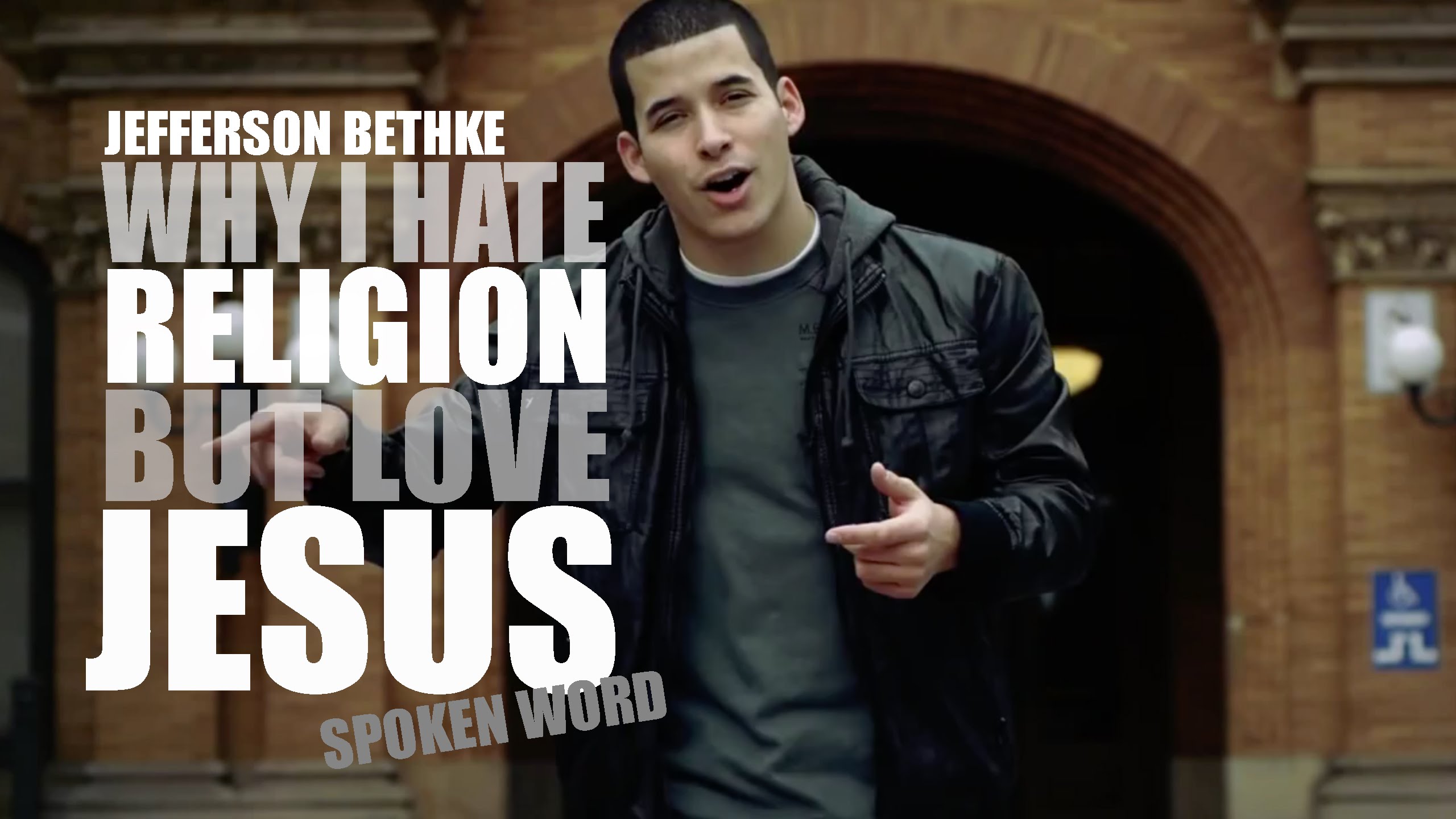 Why I Hate Religion But Love Jesus – Jefferson Bethke

Jefferson Bethke, author of Jesus > Religion, wrote this authentic spoken-word to highlight the difference between Jesus and false religion. To date, Why I Hate Religion But Love Jesus has received more than 30 million views. His conviction and passion are contagious and inspire hope for the next generation of Jesus-lovers and leaders.

Bethke writes, “In the Scriptures, Jesus received the most opposition from the most religious people of His day. At it’s core Jesus’ Gospel and the good news of the Cross is in pure opposition to self-righteousness or self-justification. Religion is man centered, Jesus is God-centered. This poem highlights my journey to discover this truth. Religion either ends in pride, or in despair. Pride, because you make a list and can do it and act better than everyone, or despair because you can’t do your own list of rules and feel ‘not good enough’ for God. With Jesus though, you have humble confident joy, because He represents you, you don’t represent yourself and His sacrifice is perfect, putting us in perfect standing with God the Father.”

Request Prayer or Talk to Someone

I mean if religion is so great, why has it started so many wars?
Why does it build huge churches, but fails to feed the poor?
Tell single moms God doesn’t love them if they’ve ever had a divorce.
But in the Old Testament God actually calls religious people whores.

Religion might preach grace, but another thing they practice:
Tend to ridicule God’s people, they did it to John the Baptist.
They can’t fix their problems, and so they just mask it,
Not realizing religion’s like spraying perfume on a casket.

See, the problem with religion is it never gets to the core.
It’s just behavior modification, like a long list of chores.
Like, let’s dress up the outside, make look nice and neat.
But it’s funny, that’s what they used to do to mummies, while the corps rots underneath.

Now I ain’t judging, I’m just saying quit putting on a fake look.
Cause there’s a problem if people only know you’re a Christian by your Facebook.
I mean in every other aspect of life, you know that logic’s unworthy.
It’s like saying you play for the Lakers just because you bought a jersey.

You see this was me too, but no one seemed to be onto me.
Acting like a church kid, while addicted to pornography.
See, on Sunday I’d go to church, but Saturday getting faded.
Acting if I was simply created just to have sex and get wasted.

See I spent my whole life building this facade of neatness.
But now that I know Jesus, I boast in my weakness.
Because if grace is water, then the Church should be an ocean.
It’s not a museum for good people, it’s a hospital for the broken.

Which is why Jesus hated religion and for it He called them fools.
Don’t you see, so much better than just following some rules.
Now let me clarify, I love the church,
I love the Bible and yes, I believe in sin.
But if Jesus came to your church, would they actually let Him in?
See, remember He was called a glutton and a drunkard by religious men.
But the Son of God never supports self righteousness–not now, not then.

Now back to the point, one thing is vital to mention:
How Jesus and religion are on opposite spectrums.
See, one’s the work of God, but one’s a man-made invention.
See, one is the cure, but the other’s the infection.
See, because religion says, “Do,” Jesus says, “Done.”
Religion says,”Slave,” Jesus says, “Son.”
Religion puts you in bondage, while Jesus sets you free.
Religion makes you blind, but Jesus makes you see.

And that’s why religion and Jesus are two different clans.
Religion is man searching for God, Christianity is God searching for man.
Which is why salvation is freely mine and forgiveness is my own.
Not based on my merits, but Jesus’s obedience alone.
Because He took the crown of thorns and the blood dripped down His face.
He took what we all deserved, I guess that’s why you call it grace.
And while being murdered, He yelled,
“Father forgive them they know not what they do.”
Because when He was dangling on that cross, He was thinking of you.
And He absorbed all of your sin and buried it in the tomb.
Which is why I’m kneeling at the cross saying, “Come on, there’s room.”

So for religion, no I hate it. In fact I literally resent it.
Because when Jesus said, “It is finished,” I believe He meant it.