“He shall have dominion also from sea to sea.” Psalms 72:8

The National Prayer Breakfast is an annual event held in Ottawa under the authority of the speakers of the Senate and the House of Commons and is organized by a group of volunteers. This year’s breakfast features an address by Governor General David Johnston. The theme of this year’s event is “He shall have dominion also from sea to sea.” Psalms 72:8

The keynote address by The Governor General of Canada begins at the 27:40 minute mark.

See his remarks below. 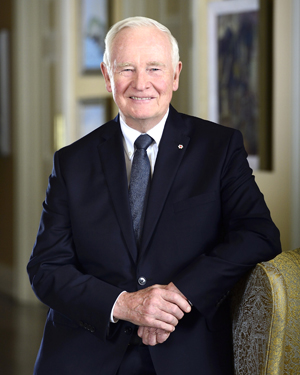 Photo credit: Sgt Ronald Duchesne, Rideau Hall
© Her Majesty The Queen in Right of Canada represented by the Office of the Secretary to the Governor General (2015)

David Johnston was born near Sudbury, Ontario on June 28, 1941. Mr. Johnston went on to attend Harvard University, where he earned a Bachelor of Arts degree in 1963, twice being selected to the All-American hockey team on his way to being named to Harvard’s athletic hall of fame. He later obtained Bachelor of Laws degrees from the University of Cambridge and Queen’s University. In 1964, he married his high school sweetheart, Sharon Johnston, with whom he has five daughters. They are grandparents to 14 grandchildren.

Mr. Johnston’s professional career began in 1966 as assistant professor in the Queen’s University law faculty. He moved on to the University of Toronto’s law faculty in 1968, and became dean of Western University’s law faculty in 1974. He was named principal and vice-chancellor of McGill University in 1979, serving for fifteen years before returning to teaching as a full-time professor in the McGill Faculty of Law. In June 1999, he became the fifth president and vice-chancellor of the University of Waterloo, serving until 2010 when he was asked to serve as Canada’s 28th governor general.

Mr. Johnston is the author or co-author of more than 25 books, and he holds honorary doctorates from more than 25 universities and learning institutions in Canada, China, India and Israel. He was invested as an officer of the Order of Canada in 1988 and promoted to companion, the Order’s highest level, in 1997.

On October 1, 2010, His Excellency the Right Honourable David Johnston was sworn in as the 28th governor general since Confederation. His motto, CONTEMPLARE MELIORA, meaning “To envisage a better world,” refers to his belief in the abilities of all Canadians to imagine and create a smarter, more caring nation and contribute to a fairer, more just world. read more

I would like to address three interrelated topics today - faith, service and love - and I will do so in the context of my own faith, as well as of my role as representative of our head of state, Queen Elizabeth II, who also serves as defender of the faith.
In my own case, the Christian faith has been my rock. I grew up in Northern Ontario in the Anglican tradition. While at university in Boston, I took the short course at the Episcopal Theological College to become a lay reader.
Among other things, it opened a whole new window in my life, because for several summers I filled in Sundays for the Anglican ministers serving the First Nations reserves at the edge of our town...and other rural parishes near my hometown of Sault Ste. Marie. It was my first in-depth encounter with First Nations people, both on and off the reserve, and a real encounter with people who had to struggle for their daily living. It was one of those transforming experiences of my life and I am very grateful for it.
Throughout her 65 years as the longest-reigning British monarch of all time, Her Majesty has stood for stability, steadfastness and stewardship. I have been much inspired by her life of service. Today I am drawing from a book about her faith that was published in honour of her 90th birthday, entitled The Servant Queen - and the King She Serves.
← National Prayer Leadership Dinner Business Tour: Greater Toronto Area →