Stop Human Trafficking. What can we do? – Joy Smith

Human trafficking is a global crime that affects almost every nation. Worldwide, traffickers make annual profits as high as $36 billion. In Canada, a trafficker earns $280 000 per victim per year. Former Canadian Member of Parliament, Joy Smith, who passed two laws combatting human trafficking, will speak to this issue and how you and your nation might act. She has seen lives drastically changed and miracles happen through the rescue and rehabilitation of trafficked victims.

***Edit: Mrs. Smith mentions that Sweden has legalized prostitution, she meant to say Germany, not Sweden.*** 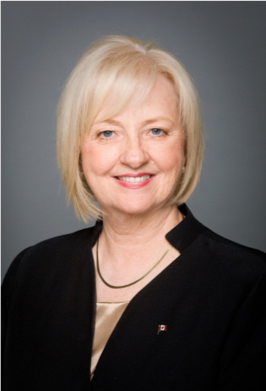 Joy Smith holds a Bachelor’s and Master’s degree in education and was a high-school math and science teacher for 23 years. She is a best-selling author of two  books: Lies My Kid’s Teacher Told Me and Tools of the Trade. In 1986 she received the Hedley Award for Excellence in Research. She was nominated as Manitoba’s Woman Entrepreneur of the Year.

Joy Smith served as Member of Parliament for Kildonan – St. Paul (2004-2015) and Member of the Manitoba Legislature (MLA) for Fort Garry (1999-2003) where she served as critic for Justice, Education, and Intergovernmental (Urban) Affairs. She also led the Manitoba Task Force for Building Sustainable Communities.

Mrs. Smith is recognized as one of Canada’s leading anti-human trafficking activists. Following her election in 2004, Mrs. Smith led the discussion on human trafficking at a national level which resulted in important changes in the Immigration and Refugee Protection Act. One of her major achievements was the unanimous passing by the House of Commons in 2007 of her Private Members Motion M-153 on human trafficking which called on Parliament to condemn the trafficking of women and children across international borders for the purposes of sexual exploitation and to immediately adopt a comprehensive strategy to combat the trafficking of persons worldwide.

In 2009, Joy Smith introduced Bill C-268, An Act to amend the Criminal Code (minimum sentence for offences involving trafficking of persons under the age of eighteen years). This Bill amended Section 279.01 of Canada’s Criminal Code to create a new offence for child trafficking with a five year mandatory penalty. It was granted Royal Assent and became law on June 29, 2010. It was only the 15th time in the history of Canada that a Private Members Bill amended the Criminal Code.

In 2011, she founded the “Joy Smith Foundation”, to combat human trafficking, and to fight for the rights of women in Canada and around the globe. Sustained by her faith, she continues to work with victims, advocates and law enforcement through the foundation by raising awareness and providing tangible support to organizations dedicated to ending human trafficking.

“Human Traffickers are empowered by public apathy and emboldened by despair. So let us shake off the shackles of indifference, and refuse to be complacent. Let us work together to bring an end to this injustice as we rescue the victims of Modern Day Slavery.” – Joy Smith

Full Biography and a list of Joy Smith’s Awards